The goal of this blog post is to explain why we did them as also show some before/after comparisons.

We removed the display of the #[must_use] attribute as we considered it was not pertinent enough. So no more: 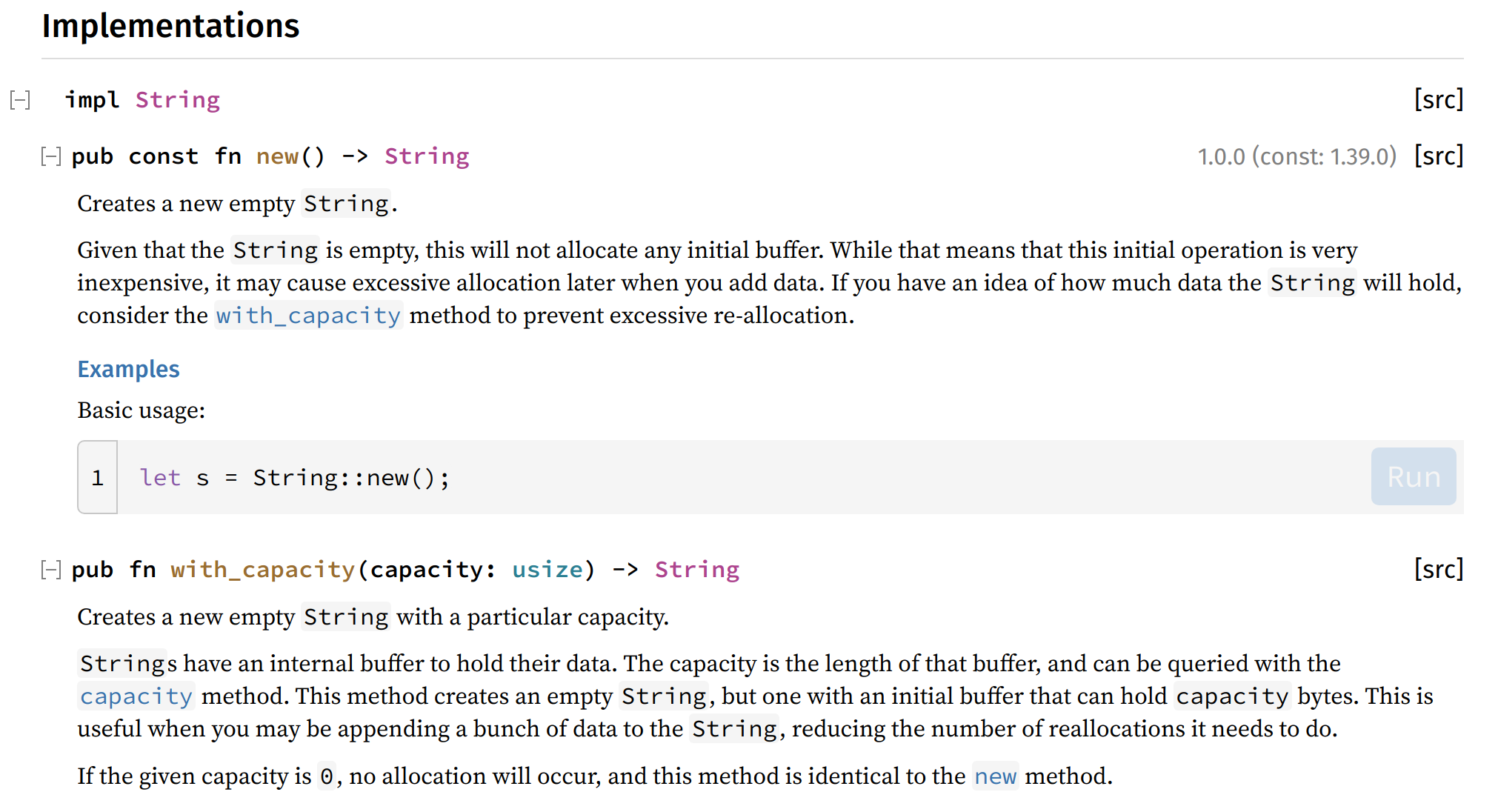 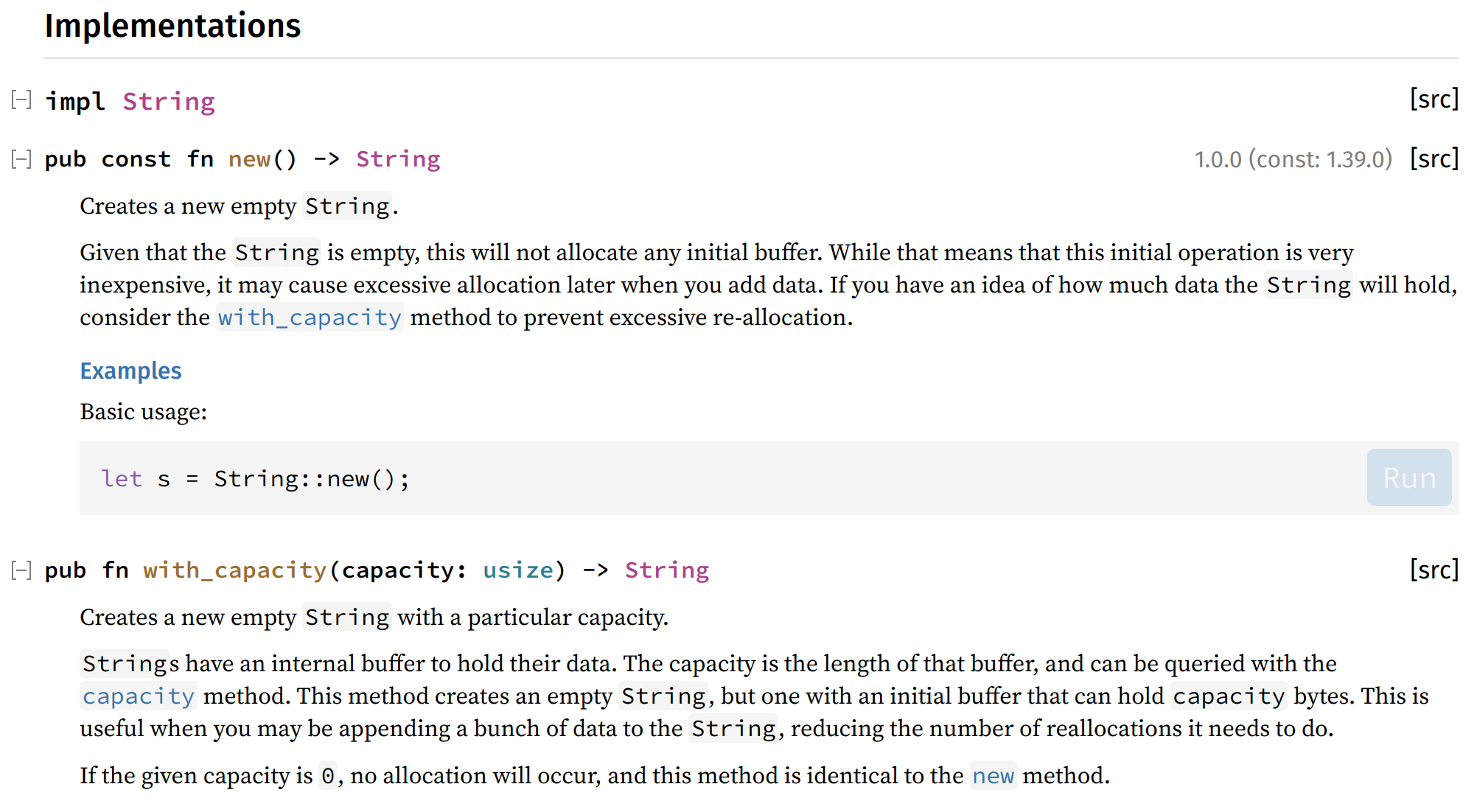 It was attracting the attention because they were actually bigger than the item itself and the underline was creating a "content split".

Only display the "Run button" on hover

So the "Run button":

which was displayed in all code examples before will now only appear when you hover the code example. It allowed to make the documentation less "noisy", making them easier to read.

This one doesn't really have a visual effects for most people, but in case you have set a different default font size, the display of rustdoc now uses it instead of overwriting it like before.

For technical details: instead of specifying the size of the font in pixels, we started using rem.

This one is quite a big change. We moved the search crate-filtering drop-down into the results page directly. So from this:

It allows to reduce the number of information displayed on the documentation while keeping the same amount of functionalities.

To be noted that this is the first step of a bigger plan to refactor how the search works: we intend to improve the UI in order to help the users write down the search request. More information in the coming months. :)

This is another big change: the change of source links appearance. We made this change for two reasons:

This isn't a UI change but definitely a UX one. You can now click on the item name in the sidebar to go back to the top of page. 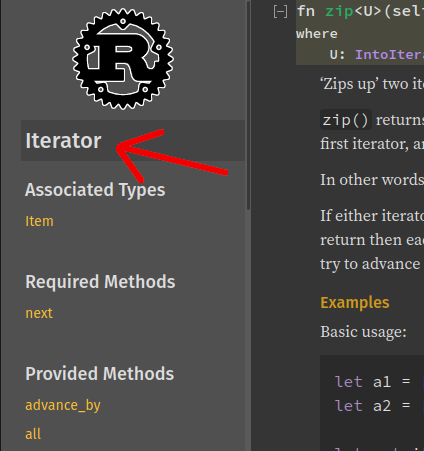 Remove horizontal lines at the top of the page

Under the search input and under the title (where the name of the item is), there were horizontal lines. This separation was not useful and just making the page "heavier" for the eye.

The sidebar was certainly one of the elements that needed the most changes. It got cleaned up and unified with the rest of the page. 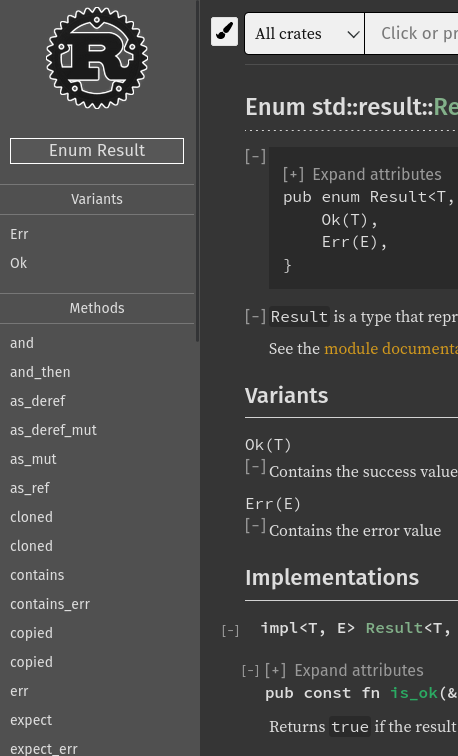 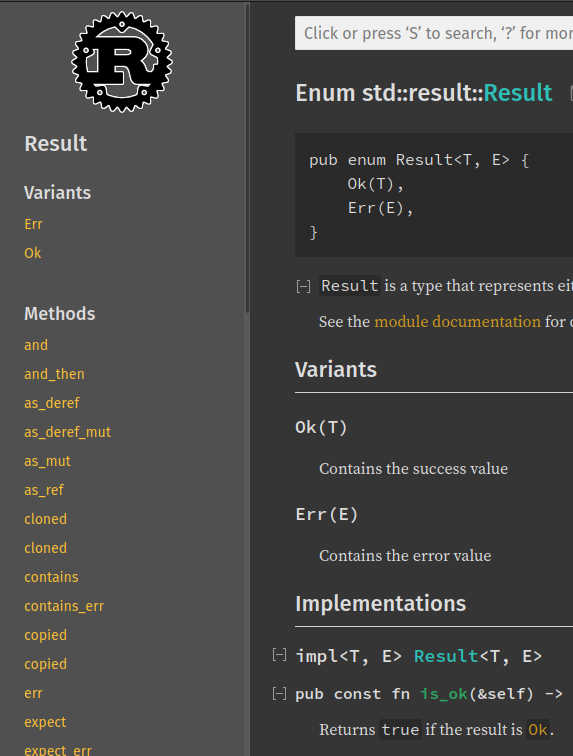 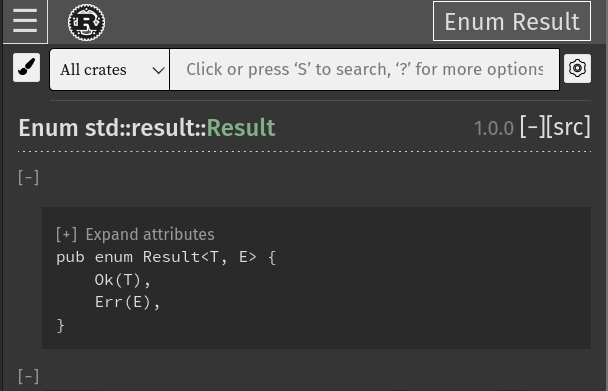 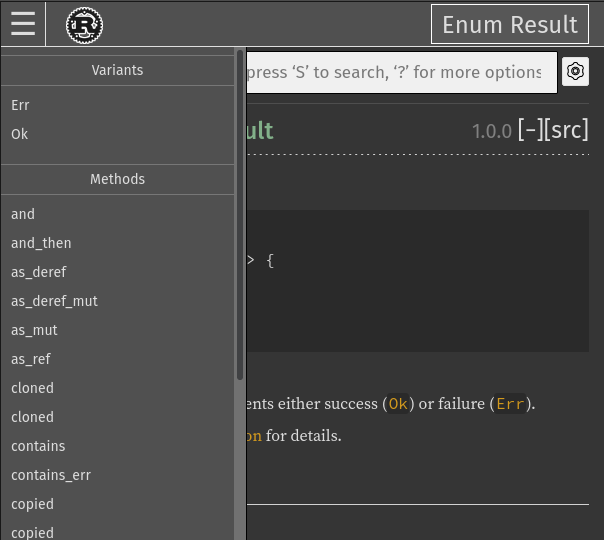 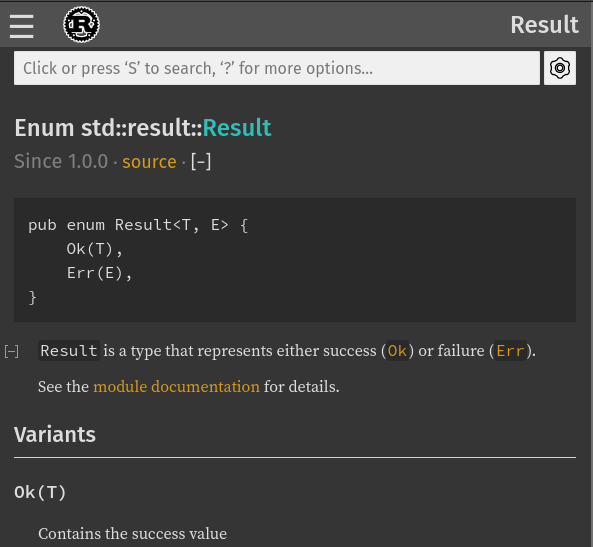 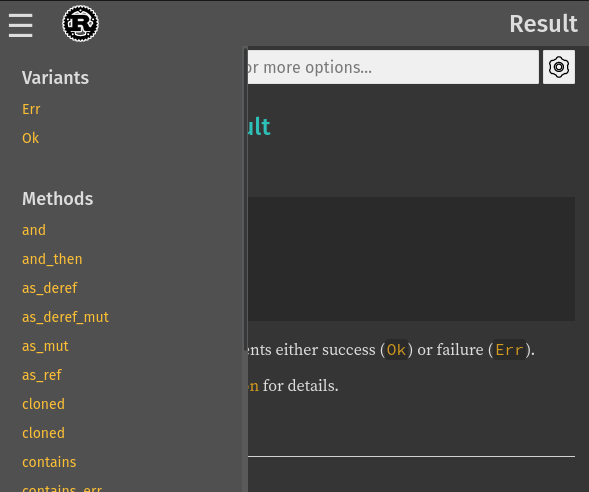 To see all the changes, I recommend you to go read the pull request.

Move item information on their own line on mobile

There is already the indent to allow the readers to see the item. Removing this arrow also allowed us to align it with the text below it.

We also made similar changes to the "Trait implementations" section that made it easier to see where one implementation ends and the next begins; and oft-requested improvement.

It was a weird incoherence: the height, the border radius and the hover were behaving differently between buttons and the search input.

Make scrollbar in the sidebar always visible for visual consistency

The problem here was that if you went from a page with not many elements into another one with enough elements to make the scrollbar in the sidebar appear, it was creating an unneeded change in layout by adding a new element (the scrollbar). 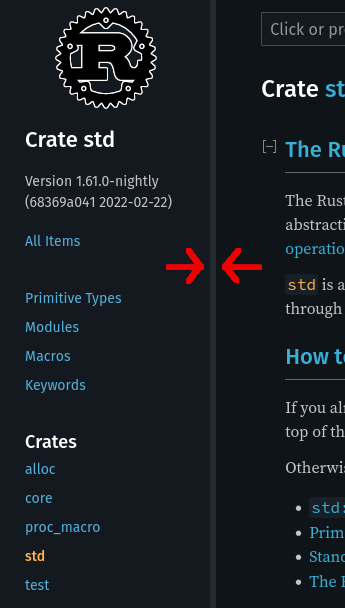 This one isn't so much as a UI/UX change but more as a nice thing to have. So now, when you open the help popup (the ? button or by pressing the ? key), you will be able to see the version of rustdoc used to generate this documentation: 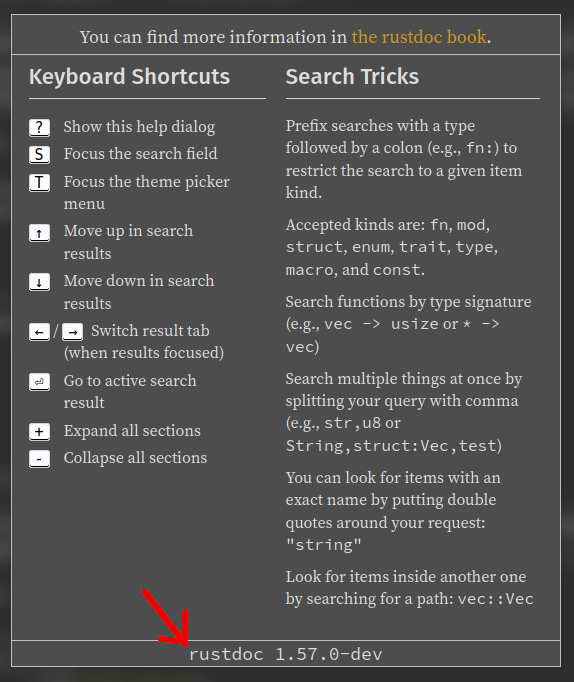 The source code viewer sidebar was suboptimal to say the least: 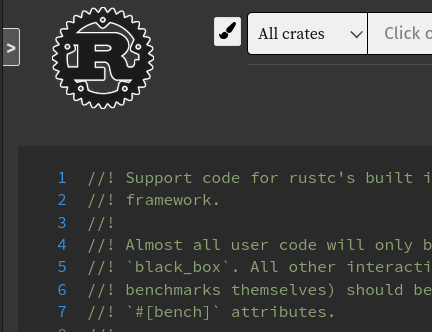 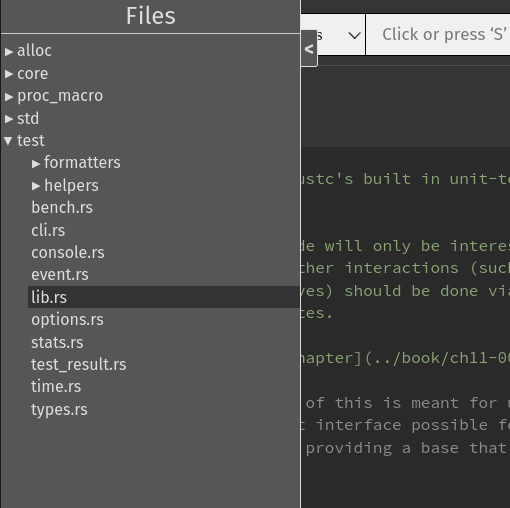 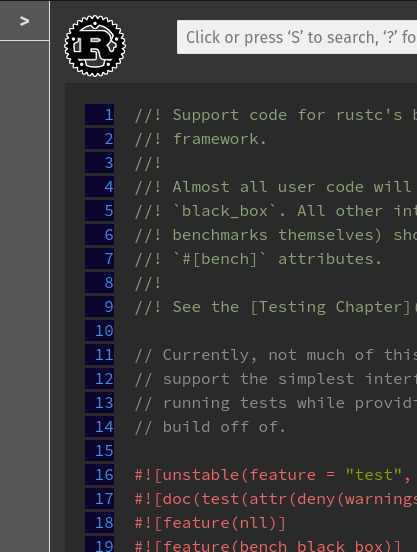 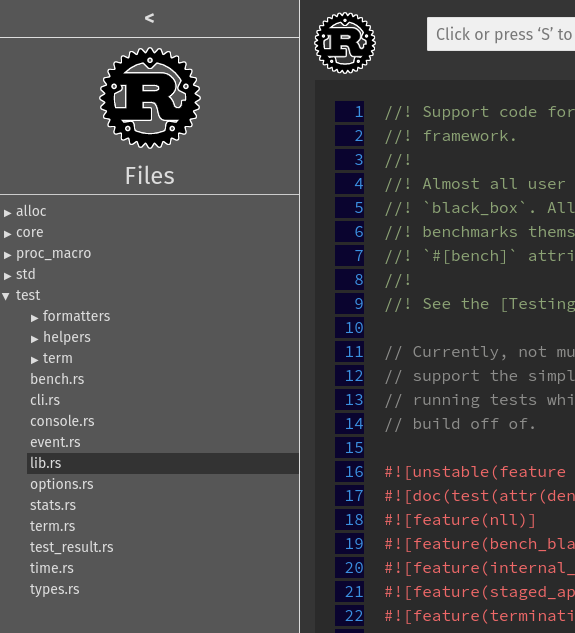 There were multiple issues with the old way of displaying enum variants: 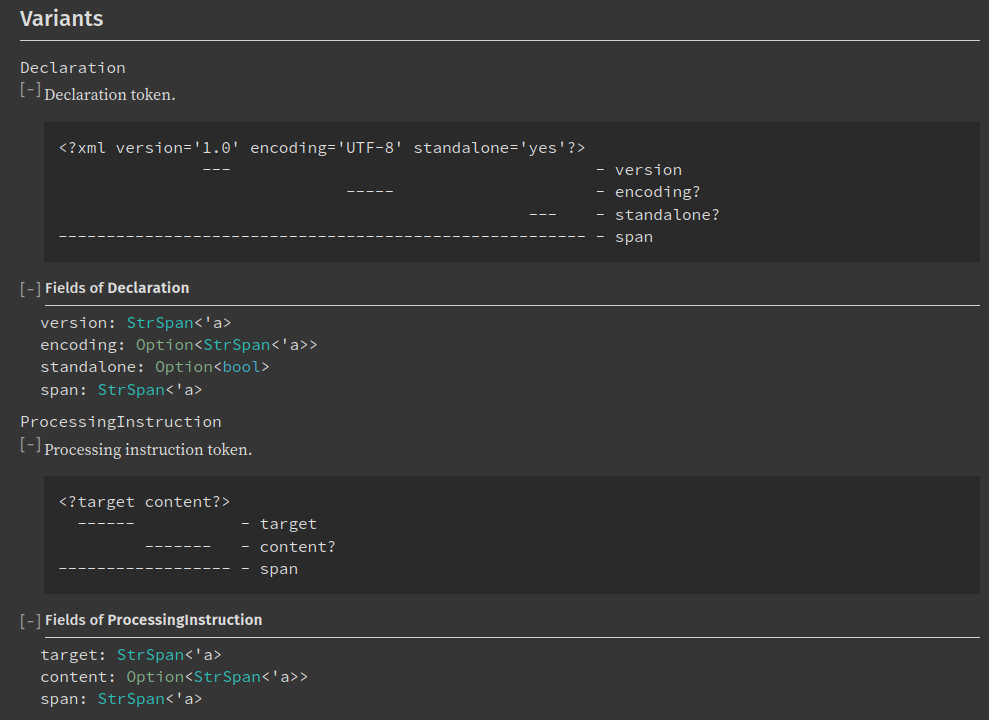 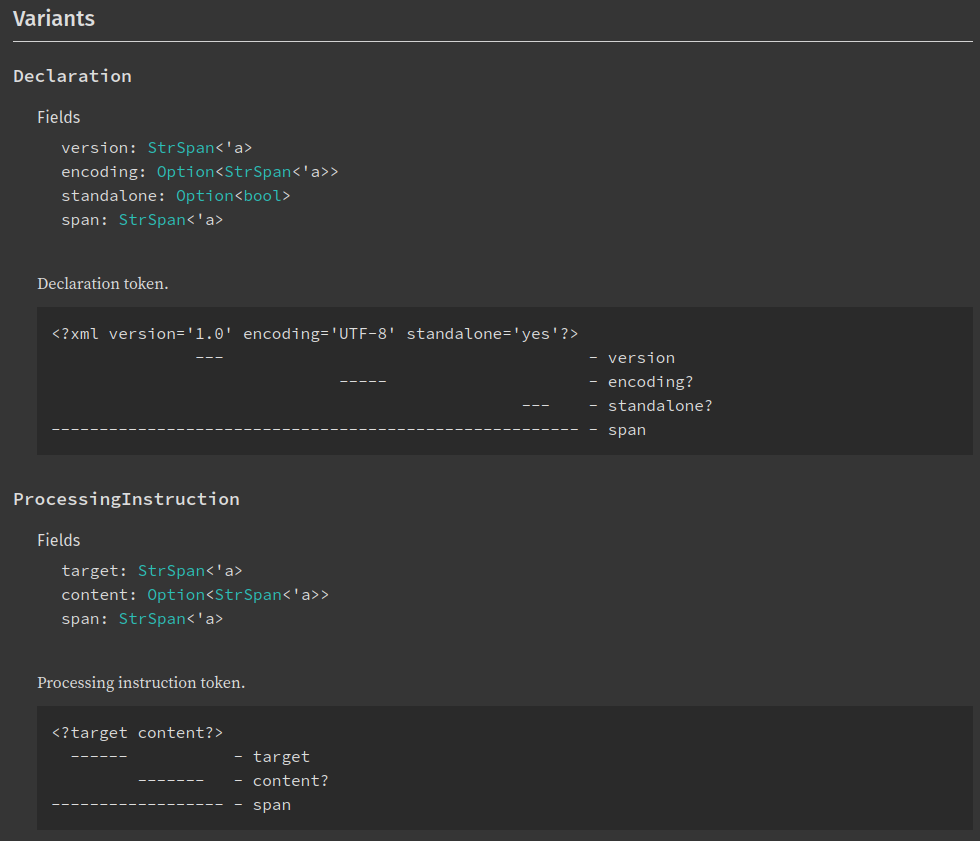 In some cases, we had some <h2> inside some <h3>. It was very bad UX for screen reader users. This pull request fixed it. Althougth it was a very important improvement in itself, there was no UI changes. It's just to show that UX is also something very important for us.

So as you saw, this is a mix of very small changes and much bigger ones. We're still continuing our effort to make Rust documentation easier to use for everyone so expect more improvements to be added in the next months!

And finally, many thanks to @jsha for their review and help on this blog post!

sysinfo: version 0.22 and FreeBSD support
Back to articles list